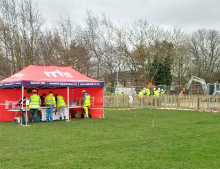 East Belfast is traditionally a working class area and the East Belfast Mission aims to help the local residents through the “Renewing and transformation of the East Belfast community”.  The Belfast Rapid Relief Team had identified and approached the Mission with an offer to help out with any upcoming events and this offer was taken […]

The historic parts of the Exeter city centre spans history from the times of Roman occupation, through the devastating Blitz during the second world war and on up until the present day. Unfortunately a huge fire broke out at 5 am on Friday 28th October 2016 in the row of greatly valued historic buildings opposite […]

The Plymouth Soup Run is a community and faith driven service providing free food and hot drinks to homeless, hungry and vulnerable people 365 days a year.   It is run by dedicated teams from local churches and communities in Plymouth. The teams go out each evening from Monday to Saturday serving the food and drink […]

Once again the RRT took part in the annual ‘Bag It, Beat It’ campaign to raise vital funds for British Heart Foundation research. Now after the fifth year of supporting the campaign, nearly 50,000 bags have been collected and donated to the BHF bag-a-thons by the RRT and PBCC community. ‘Bag It, Beat It’ is […]

The FROG event (Fun Run of the Glens) is held annually in support of the cancer charities Marie Curie Cancer Care and Cancer Focus Northern Ireland.  Now in its 11th year, the organisers from Fujitsu worked hard to make this event bigger and better than ever!  The Rapid Relief Team had been involved in the […]

A host of young volunteers from across the borough of Newtownabbey, Northern Ireland, were fortified by a hot meal by the Plymouth Brethren Rapid Relief Team to keep them enthused and in perfect working order for another day of serving the community in practical ways and in demonstrating the love of God to all. SPARK is in its […]