Once again the RRT took part in the annual ‘Bag It, Beat It’ campaign to raise vital funds for British Heart Foundation research. Now after the fifth year of supporting the campaign, nearly 50,000 bags have been collected and donated to the BHF bag-a-thons by the RRT and PBCC community.
‘Bag It, Beat It’ is a nationwide campaign run every year by the British Heart Foundation allowing families and individuals throughout the UK to donate £100,000’s of re-saleable goods and clothes to BHF. The funds generated by the sale of these items goes towards the cost of continued research by medical experts into heart diseases.

Reaching the target of 13,000 bags donated to BHF in the 2015 campaign was very rewarding, so RRT UK set their sights a little higher and decided to find ways to do even more to raise funds for this life-saving research. Collecting up bags of goods and clothing from local communities across the country in a very short period of time, the RRT teams nationwide worked tirelessly once again to smash their target! At the end of the campaign over 16,000 bags had been delivered to local stores to be sold nationwide – worth in excess of £192,000 of revenue for BHF!

RRT this year delivered over 16000 bags to local BHF Stores 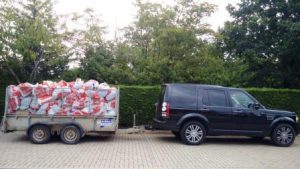 Just a few of the thousands of bags collected!

Below is a message received from the British Heart Foundation thanking RRT for its much needed
support.
“We are extremely grateful to the RRT for what is once again an amazing contribution to our
Bag It Beat It campaign. Not only was the target larger than ever before, but it was beaten,
with over sixteen thousand bags so far, which could potentially be worth £192 thousand
pounds worth of research. Without your support we couldn’t undertake the life-saving
research that we do. Thank you.”

The British Heart Foundation was very glad of the support of the RRT yet again.

RRT and all its members have been very glad to involved again in support for such a great cause – lifesaving research for the benefit of people all around us – and wish the BHF the very best as they
approach another year of dedication to reducing lives affected by heart diseases.