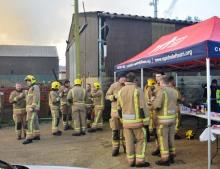 Early in the day of the 13th January 2017, the police started advising residents that there would be a need to evacuate some houses in Aldeburgh due to an expected tidal surge in the evening. Aldeburgh RRT contacted Ipswich RRT and agreed that we would work together with Ipswich providing the Rapid Deployment Trailer and […]