The FROG event (Fun Run of the Glens) is held annually in support of the cancer charities Marie Curie Cancer Care and Cancer Focus Northern Ireland.  Now in its 11th year, the organisers from Fujitsu worked hard to make this event bigger and better than ever!  The Rapid Relief Team had been involved in the 2015 event and with hugely positive feedback last year, the decision to help out in 2016 was an easy one to make.

For 2016, there were over 700 cyclists signed up to take part in the non-competitive cycle over 3 distances; 25 miles, 50 miles and 100 miles.  The route takes in some of the most beautiful parts of the Co. Antrim coastline and the steep climbs through the famous Glens of Antrim make this a challenging yet enjoyable event to take part in and support.

Starting the day before the event, The Plymouth Brethren Rapid Relief Team (RRT) swung in to action to offer whatever support they could starting with setting up the main venue at the start/finish points, to provide a support base for the cyclists, supporters and event organisers.

Group photo of the participants in front of the RRT tent.

Saturday 11-06-2016 event was a whirl of activity with over 45 volunteers pitching in to help out with the smooth running of the day.  From helping with initial registration at the venue, collecting money raised through the cyclists donations, marshalling along the course and providing water stations and offering scones with jam and fresh cream, the effort was clearly very much appreciated by all involved.

To cap it all the RRT volunteers cooked a superb lunch for the day with everyone enjoying BBQ sausages, ham pasta salad, curried chicken rice and sandwiches, topped off with snacks, brownies and fudge.  The lunch by report was considered the “highlight of the day” and definitely seemed to inspire the ‘100 milers’ to head out for their second loop of the 50 mile course. 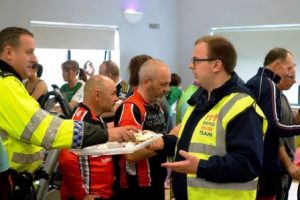 Serving out the scones!

Once again RRT felt very privileged to support this event which provides so much needed funding for Marie Curie Cancer Care and Cancer Focus Northern Ireland.  Over £45,000 has been raised from the day.

Hot coffees were popular in the damp weather.

Even the weather couldn’t dampen the spirits on the day – Northern Ireland’s 2 weeks of sunshine having finished 2 days before the event started!

Many volunteers received very positive feedback from those who took part including the following comments:  “RRT has transformed FROG!”.  “So much better these last 2 years since RRT are here!”  The organisers added to this by saying that “Everyone is raving about RRT”.

RRT were glad to support this worthy cause – Roll on FROG 2017…!