The historic parts of the Exeter city centre spans history from the times of Roman occupation, through the devastating Blitz during the second world war and on up until the present day. Unfortunately a huge fire broke out at 5 am on Friday 28th October 2016 in the row of greatly valued historic buildings opposite the Cathedral in the City Centre.  The Royal Clarence Hotel (built in the mid 1700’s) and adjoining buildings were devastated by the fire and consequently completely destroyed in little more than 24 hours. 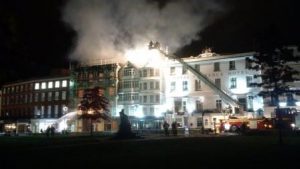 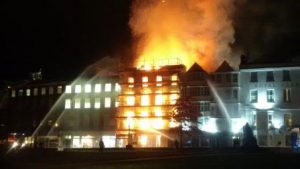 The inferno was the worst seen in many years

At the sound of the alarms ringing a team of members from Exeter & Torbay RRT responded to what was to be the largest coordination of fire resources in the south west of England in many years.  On arrival the team were faced with helping in many ways including the evacuation of disoriented guests from the hotel through to Police and Fire officers battling to gain control of the scene.  By mid-day the number of fire appliances had reached 32 pumps and one experienced firefighter mentioned that this was the first time in his long career that 4 high lift fire platforms had ever been on one site at the same time.  Water and foam was being poured as fast as water pressure could allow up from the Quay and Canal and so were the RRT urns from the trailer and tent set up earlier in the day.  RRT served 900 meals and 1600 hot drinks to exhausted police and firefighters and finally pulled off site after breakfast on Sunday 30th October at 9 am. 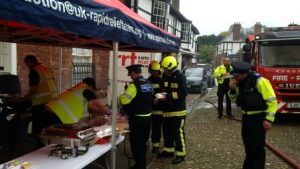 Exhausted emergency teams were grateful for the support. 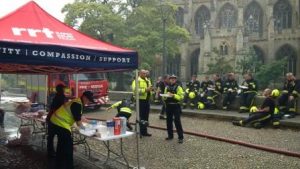 Over 900 meals were served to emergency services!

Many grateful thanks were received and the team spirit of Emergency workers, property owners, RRT members and general public was a special moment to experience.  One of the many testimonials came from a Fire Logistics Manager and he said “I was at the incident from 1830hrs on Friday night through till 0700hrs Saturday Morning and the hospitality that your team gave was second to none!”

RRT was on site from the first alarm.

The city centre remained closed due to the unstable nature of the devastated scene causing a high level of uncertainty for some store owners right in time of high trading and sales.  Whilst clearly this was a great time of despair and sadness for property owners and historians alike, the RRT were glad to help and support for all teams from the Police, Fire, HART Ambulance Service, the Media and other affected persons. Our condolences to all affected by this devastating loss.

The largest blaze in many years destroyed a portion of Exeter’s historic buildings.