Broadlands Care Home is an imposing Edwardian house set in three acres of beautiful grounds leading right onto the waterfront of the Broads. Many of the rooms have outstanding views and there is a choice of comfortable lounges for use by the residents. It was in one of these lounges that one of the Lowestoft PBCC bands gave a rousing musical performance on Saturday 1st February.

Serving Sponge Cake to the residents

Good old favourites such as Cottonfields and Hello Mary Lou had the residents tapping their feet in time, and the canteen staff were spotted singing along enthusiastically! There were several hymns played to which the residents sang along with, and were requesting songs such as The Old Rugged Cross, and How Great Thou Art. They spoke of the attractiveness of seeing young persons singing the hymns and were thrilled that they had spared the time to come and give them a bit of uplift to their daily routine! 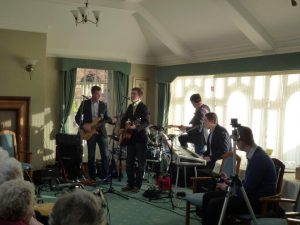 The band in session.

After the music had finished, young brethren girls took round cakes that they’d brought in for the residents, which was devoured eagerly. The residents were glad of the opportunity to chat and ask about the brethren, and their churches, and the young brethren enjoyed the experience, – it was well worth all the practising!

Residents listening to the music.

The Care home events manager was really pleased with this event, and invited the PBCC back to perform, possibly outside in the grounds during the summer months which everyone is looking forward to!

Chatting to the residents

The noticeboard in the hallway

Residents singing along to the hymns.

82 thoughts on “Lowestoft Band at Broadlands”