Children and the young are at the heart of any family, community or country.  They represent the future, providing happiness and joy.    Water sanitisation, nutrition, food, and immunisation are just some examples of the work of UNICEF that has contributed to infant deaths worldwide falling by over 50% since 1990.

For over 35 years the PBCC have had strong links with Qantas Airlines. They have been galvanised into action by seeing the link between Qantas and UNICEF in the Change for Good program.   The incredible $130M that has been raised by this campaign in conjunction with airlines is truly amazing and we wanted to be part of this saving and protecting the world’s most vulnerable children. 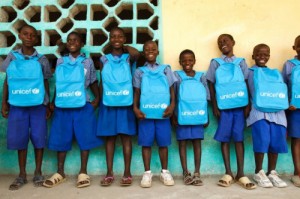 Over 2 months, December 2014 and January 2015, the PBCC raised AUD $34,573.56 to support the program. The money was raised through donations from PBCC while travelling on QANTAS aircraft.

Customer Experience Manager of QANTAS Josh Rogers said of a previous donation the Plymouth brethren made to the same cause “We love having the brethren onboard and we really appreciate everything they do for UNICEF”.

An extract from the letter of thanks from UNICEF reads  “17 cents is all it takes to vaccinate a child against a life threatening disease such as polio, 50 cents to supply a book and pencil to a school pupil and just 5 cents to provide a child with clean water for two days. As such the donations collected from Plymouth Brethren Christian Church will go a long way in helping UNICEF to deliver quality education, provide clean water as well as lifesaving health care to thousands of vulnerable children.”