The final round of the FIA World Rally Championship (WRC) blasted in to Newtown on Friday 13th November to break the day up between its gruelling 6 rally stages in the famous dark damp Welsh forests.  The streets were closed off so that the rally teams could stop off for lunch and have a tyre change in the Tyre Fitting Zone (TFZ) before heading back out into the action.

Heavy rain and gale force winds challenged the organisers in the days running up to the event.  However, it would have to take more than that to cancel an event that brings so much to the town…! It brings over 84,000 people into Mid Wales and has a £10million impact on the local economy.  The 2014 event also raised over £42,000 for local charities and other good causes.

Newtown and District Automobile Club were responsible to set up and run the day’s events in Newtown and requested RRT’s assistance.  Newtown RRT were drafted in on Thursday night to help set up and layout the Tyre Fitting Zone.  Temporary fencing was put in place and the whole area had to be taped off to stop any fans/spectators/photographers entering without the correct permits. 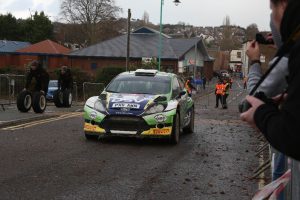 For the big day, over 20 members RRT were in action – from 7am in the morning they were setting up crowd control measures in the town centre and closing off roads to the public.  A media car park was set up ready for not only the travelling TV/press crews but also as an area for local councillors, the mayor and MP to meet and get to see the action close up.

Marshalling at the TFZ

When the world champion Sébastien Ogier rolled into town, RRT were busy marshalling, directing traffic and controlling the media zone.  The heavens opened once or twice to remind us of how Wales manages to keep so green and right there when you need them, the RRT were on hand with umbrellas! Paul Woodford, reporting live on TV for BT Sport said, “the help from the Rapid Relief Team has really made this event special.”

After the regroup in the town centre all the competitors were clocked out of the town and up against the stopwatch again as they went through the TFZ, scrutineering and back off into the forests.  When all cars had left the town, the big clear up began.  All litter had to be collected, barriers, temporary fencing, tape and signage had to be moved, gathered up and returned to base. 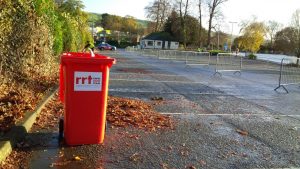 The big clear up underway…

Montgomeryshire MP, Glyn Davies said “it is a big plus for the town, but it doesn’t happen without a lot of help, a lot of people putting their effort in… that’s exactly what the Rapid Relief Team have done, an awful lot to make sure it has gone very smoothly.” 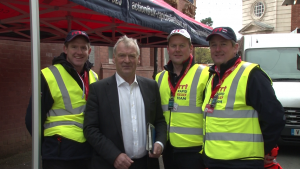 MP Glyn Davies with some of the RRT members