Wednesday 29th April 2015 will be remembered as the infamous day that Surrey and the UK lost many priceless and irreplaceable artefacts from history in the blaze that ripped through and destroyed the Grade I-listed 18th century stately Clandon Park House, near Guildford in Surrey, leaving only the external walls intact! This was one of the country’s most complete examples of a Palladian mansion. Only one room was left relatively untouched!

The fire is believed to have started at around 4pm in the basement which quickly spread to the roof through voids and took hold, accelerated by a strong wind. Guildford RRT team received a call at around 6.30pm from Surrey Fire & Rescue Service, asking for their assistance in providing refreshments for the approx. 80 fire personnel on site as well as staff from Surrey Police, the National Trust, South East Coast Ambulance Service and the Red Cross. Fire crews from across the south east were present including West Sussex crews from Horsham and London Fire Brigade from Biggin Hill on the edge of the Surrey border.

Guildford and Farnham RRT teams had been working with Surrey Fire & Rescue Service only the previous week at the common fire on Pirbright Military Firing Ranges and the wheels were still well greased! Guildford RRT called for support from the Fernhurst RRT team and were quickly on site setting up their equipment in the carpark at Clandon Park. Hot food and drinks were soon being provided for crews that had been stood down after several hours of battling the flames. 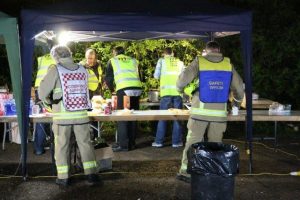 This continued through the night and into the early hours of Thursday morning as the shift changed and new crews arrived on site to relieve their colleagues. RRT finally packed up and pulled out at 8.45 on Thursday morning having.

The work of the RRT team was greatly appreciated by all and they received personal thanks from the Incident Commander, the local MP, the National Trust Director General and many others.