The Mission of the Friary Drop In Centre in Bridgford, Nottingham is as below:

We empower homeless and vulnerable adults to rebuild their lives by offering practical services, advice and emotional support.

…and this is what they are constantly doing, day in day out.  The Friary has an ‘open door’ policy and provides services to individuals from all different walks of life.  Ann Bremner (General Manager of the Friary) said that once they took in a man…”he was a bit of a rocker… we cut his hair and his beard, gave him a shower and changed his clothes and when the man left he said “I feel a totally different person”.
On Saturday 18th July 2015 the Rapid Relief Team from Nottingham were privileged to be invited to join with the Friary in their 27th anniversary by providing the disadvantaged and needy men and women with a full BBQ meal and a live band, playing a range of music including some gospel tunes.

RRT presenting a celebratory cake to the Friary General Manager

The team arrived on site at 10:30am and quickly unloaded the vehicles and got set up so they were ready to roll at 12.30pm. Many men and woman, having looked forward to this event all week, started arriving from 11.00am onwards.  At least 80 came to the event and 200 burgers were gratefully received and consumed.

The band played constantly for an hour and a half whilst the food was being served – they did an excellent job and it was so well performed that it moved some of the attendees to rise from their tables and dance to the music!

Serving the guests with a BBQ lunch

One younger man who was at the event said “this is the best day in my life” (remember, many of those present wouldn’t have ever been to a party or even had a BBQ before).  Another man said “sleeping in a bus shelter every night can’t be right but these people (the Friary) really help me.  An older gentleman who was there, when asked what he thought about the music, he replied “the song about Jesus (Give Them All To Jesus) is a good song”.

The busy scene in the kitchen

It was evident for all to see that the efforts of the RRT were very well received and appreciated by all those who came and many were asking when the Rapid Relief Team would be back.

The event officially concluded at 2:00pm and the site was totally cleared by 3:00pm and the RRT left feeling enthused and happy to have helped the Friary touch so many hearts and make a difference to their day!! 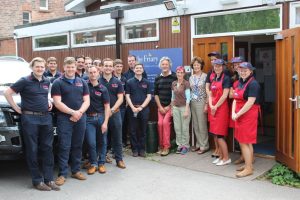 The RRT Team with the Friary Organizers