Residents of a thatched cottage in East Hagbourne, Oxfordshire (a village near to Didcot) had to flee their property as a fire broke out at 22:30 on Saturday 29th June. By the time the Oxfordshire Fire and Rescue Service arrived the blaze was already well-established, and occupants from adjoining houses were asked to vacate their properties.

Seven fire crews moved quickly to stop the fire spreading to neighbouring homes and worked through the night damping down the thatch. Local members of the Plymouth Brethren Christian Church arrived on the scene at the same time as the Fire and Rescue Service, and their offer of a Rapid Relief Team to provide refreshments for the 40 fire fighters was gratefully received by the incident commander. 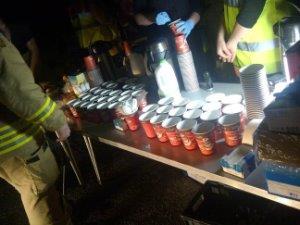 Governors and the Head Teacher of the local Hagbourne School kindly made their building and equipment available for the Rapid Relief Team to use, with a generator also being provided by a local resident, as electricity in that part of village had been switched off due to the fire.

The RRT remained on site throughout the night, supported by local residents, leaving around 05:00 when it became clear the incident was finally under control, and the numbers of fire fighters on site were being reduced. However, during the day on Sunday the RRT called in on a number of occasions to continue to provide food and drink, to be served by willing local residents to the Fire and Rescue Service. Due to the risk of the fire breaking out again in what remained of the thatch, fire fighters continued to monitor the property until Monday evening.

In the words of W/M Lee Swain – “The fact that you were providing endless cups of hot tea and coffee, and snacks – always with a smile – made it that little bit easier for us to stay focused on the job in hand and continue with our attempts to salvage as much property as we possibly could. This was, by far, the most generous and considerate welfare service I have experienced at an incident – please pass on this message to everyone in the Rapid Relief Team who contributed to this effort.” 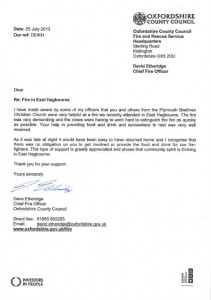