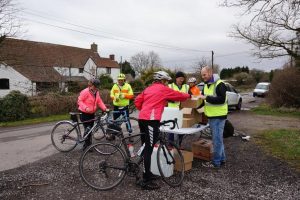 The food stations were a hit with the cyclists

Bristol charity St Peter’s Hospice held its first ever ‘Tour de Bristol’ sponsored cycle ride on Saturday 28th March 2015. Over 400 volunteering cyclists participated, choosing from 30Km, 50Km & 75Km routes. These circular routes were around North Somerset, and passed through many pretty villages, including Portbury, Kingston Seymour and Butcombe. Along all of the routes were feed stations to help keep energy levels up of the cyclists.

St Peter’s Hospice asked the RRT if they would donate cakes for their refreshment stations, and were really thrilled when the RRT came back with several hundred home-made cakes! After the event they sent a note of thanks to the RRT saying ‘A Huge thank you to you and all your volunteer bakers for our Tour de Bristol event on Saturday. The cakes went down a storm with the riders and volunteer’s on the day and have had lots of really lovely feedback since the event.’

Cyclists stopping off at one of the many food stations

The event was a great success and raised £40,000 for St Peter’s Hospice.

RRT preparing to deliver the cakes to the various stations along the routes.