It was 2.30pm on a typical cloudy March day, when a fire broke out at EMR, a scrap merchant in Clarel Avenue, near Adderley Park Station.  It rapidly spread until it engulfed 800 tonnes of metal, plastic and rubber recycling waste, pouring toxic fumes and smoke into the atmosphere, which the wind carried in a north easterly direction.

The fire brigade reacted immediately to the seriousness of the blaze and initially around 20 tenders rushed to the scene.  This increased until over 100 firefighters from across the West Midlands were tackling the fire.  Together with the fire brigade, the Police took overall control of access to the immediate vicinity.  Due to the close proximity of overhead pylons, the National Grid were also present (shutting down the supply for a time), and the Gas Board to monitor the possible breach of a major supply pipe to the City.  There were also personal from the Canal and River Ways Authority, Network Rail and the Environment Agency. 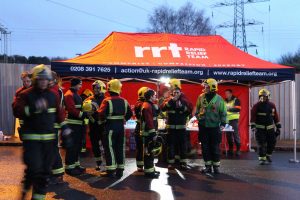 Fire crews and other emergency personnel around the RRT tent

At approximately 3.45pm, the Rapid Relief Team arrived at the scene and were signed on by the control centre at 5.50pm, for welfare provision.  They erected a marquee, from which their teams served hot and cold drinks, crisps, sausage rolls, cakes and biscuits.  RRT continued this service throughout the night, in three shifts, providing much needed refreshment for the firefighters and the many others on site.  The local Morrisons were very generous in donating £150 of food and drinks and Tesco supplied £50 free food.

Firefighters leave messages of appreciation at the RRT tent

The Rapid Relief Team were signed off at 7.30am Wednesday morning

One thought on “Saltley Scrapyard Fire”