Saturday the 25th of July 2015 was an early start for a team of eight dedicated cyclists who also happened to be fire- fighters! The thought, which seemed like a good one to them at the time of planning, possibly seemed a little less invigorating to the team that set out in heavy rain and high winds. They started out at 12 noon on Friday from their local fire station in Devizes, Wiltshire. The plan was to cycle from Devizes to 24 fire stations in Wiltshire within a 24 hour period! A total distance of 194 miles!! Mike Cleaver, arranged the event to raise money to support the Epilepsy Society and the Firefighters Charity.

Mike, a fire-fighter, had reason to support the Epilepsy Society as a close family member has been diagnosed with Epilepsy. This society actively campaigns on behalf of people with epilepsy and their work on public policy is shaping the future of epilepsy. The Firefighters Charity exists to help members of the fire and rescue community who put their lives on the line every day to save others, whilst providing support for their families. Both charities support worthy causes that could be taken advantage of by any of us at any time.

Cyclists arriving at Stratton St. Margaret Fire Station in Swindon at around 3:15am!

RRT were contacted by the Wiltshire Fire Brigade on 10th July to provide refreshments at the stop in Stratton St. Margaret Fire Station in Swindon. The crew were expected to arrive at the unmanned station in the early hours of Saturday morning. At this station the cyclists would need a meal to set them on their way for the last leg of this amazing journey!

The RRT catering team started working on Friday morning to prepare the food.  Some of the team arrived at 9 p.m. and worked into the night until the cyclists arrived! The team was ready to greet the cyclists with dry towels and water when they pulled in at 3:30am!! 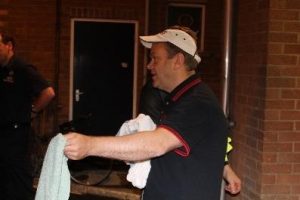 Greeting the cyclists as they arrive. 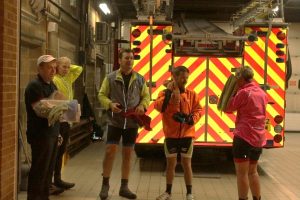 Fresh Lasagne cooking was a welcome smell by the hungry, exhausted cyclists!  The new potatoes, tomatoes and rolls with butter were not missed by anyone!  Fresh fruit kebabs were an energizing feast!  The cyclists were well enthused with the warm wet cloths to freshen up with after their early morning dinner! 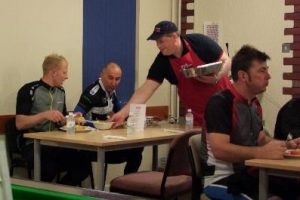 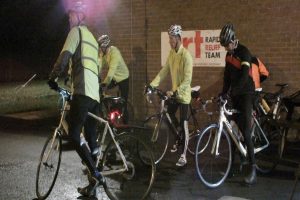 And they are off again…!

As reported in the local paper