Wednesday 5th February 2014 was another very wet day for the residents of the Somerset Levels. An ‘Amber’ weather warning of rain was issued by the Met Office, meaning more flooded houses and more heartache for the local residents living at Northmoor and Moorland where they have been battling the rising floods. 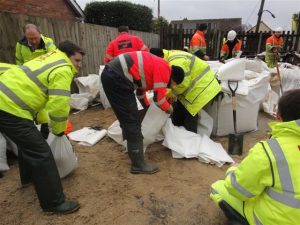 Much of the land on the Somerset Levels is only a few metres above sea level and lower than the level of the high spring tides. Before the Dutch engineers came up with a plan to drain the Levels in the 17th century it was called Summerlands, because you could only see the land in the summertime, which is where Somerset is said to derive its name. With more than 200mm of rain so far this year, over 25 square miles of land is under water, flooding scores of homes and farms. Flooding on the Somerset Levels was declared as a Major Incident on Friday 24th January, headed up by Cobra with a Gold, Silver and Bronze command structure.

The Rapid Relief Teams from Taunton and Yeovil were called on Wednesday morning to assist the Sedgemoor District Council preparing sandbags to protect properties. But as the weather deteriorated further, there was an urgent call from ‘Gold Command’ to divert to the Moorland Village Hall to assist with filling sandbags there. They joined a hard working team of Somerset County Council workers, Environment Agency workers and local residents who were fighting to save their houses from flooding. One local resident praised the work of the volunteers, and said that in all the 42 years he had lived at Moorland, he had never seen the flooding so bad.

Emergency Services at the scene

The Royal Marines have been drafted in to help with the flooding issue along with the British Red Cross and many other voluntary agencies. Prince Charles visited the Somerset Levels and described the flooding as ‘shocking’. Prime Minister David Cameron also visited the area and gave much needed support and assurance to the distressed residents and praised the work of the Environment Agency and the voluntary agencies in the tireless work they have been doing. 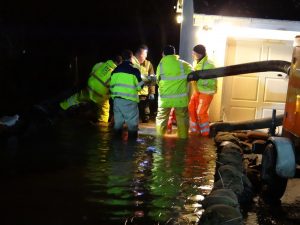 The Rapid Relief Team provided a second shift on Wednesday evening with an additional team called in from the Bristol RRT to swell the much needed manpower. The Environmental Agency requested help to erect a metal flood barrier to help save the houses of Moorland. This involved clearing a straight path for the barrier through the gardens, removing fences and walls, and cutting hedges down. The barrier needed to be bolted together, covered with polythene and weighed down with sandbags. The RRT teams worked late into the night until the flood barrier was completed. The Environmental Agency praised the efforts of the RRT for the united joint effort in this ongoing battle to keep Moorland above the rising flood waters. 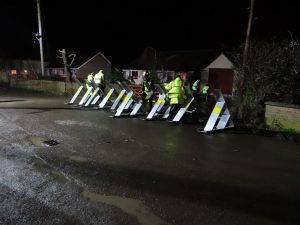 RRT helping to assemble the Flood Wall late at night.

Financial aid of £10million from Central Government has been promised to the Somerset Levels for essential dredging of the River Parrett, River Tone and the River Yeo, which should drastically improve the capacity and flow rate of these rivers to reduce flooding in future. However, more rain is forecast and the water levels are still rising.