Saturday 10th October 2015, and the front lawn of Chichester Cathedral was strewn with cardboard.  But this was no mistake, no mishap.  It was the 3rd annual Big SleepOut event for Chichester based homeless charity, Stonepillow. 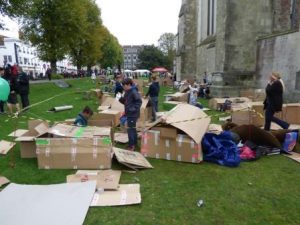 Late morning, and the shelters are beginning to take shape

Participants constructed cardboard shelters throughout the day and then slept in them overnight, to raise funds for the all-important work of Stonepillow.  Sponsored by Henry Adams estate agents, and supported by Bognor Regis RRT and numerous willing volunteers, this helped to ensure every penny raised went directly towards helping rough sleepers in West Sussex to get off the streets and re-integrate back into society.

The Bognor Rapid Relief Team assisted with the setting up in the morning, and provided food and refreshments throughout the day.

Music, children’s entertainment and an exhibition of Stonepillow’s work were a source of great interest to passers-by.

Music, kid’s entertainment, and a stone pillow exhibition of work

Shelters were many and varied – some made for just one occupant, whilst others were large enough to house more than 10!  Proud builders added their finishing touches before moving them to the safety of the rear lawn for the overnight stay.

On the same day a further 42 food boxes were also delivered to Big Love, another important homeless charity in Bognor Regis.

At the time of this article, sponsor monies for the Big SleepOut event were well on the way to Stonepillow’s target of £15,000.  A very successful day for all involved.

One thought on “RRT Supports Stonepillow on World Homeless Day”