RRT helps out with the Parish of Standon Litter Bin Upgrade

RRT volunteers took up the initiative on 25 March 2016 in the Parish of Standon to improve the litter bin facilities within the area.  The Parish of Standon is located on the Greenwich Meridian line, some 25 miles north of London, UK, and includes the rural villages of Standon, Puckeridge and Colliers End.

Some of the litter bins in the area had become tatty, damaged and in dire need of replacement. 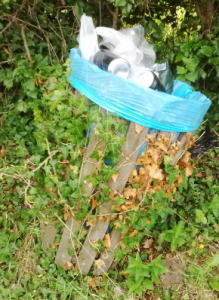 As part of RRT`s commitment to support within the community, RRT volunteers worked with the local council to identify and agree on the litter bins and dog bins that needed replacement.  A fleet of new bins was duly donated to the council, and installed by RRT volunteers.

The volunteer team received grateful comments for their efforts from members of the public who were delighted to see the works progressing.  In particular, some of the old bins had become so damaged that they had to be removed, and their reinstatement was very well received.

Even the local doctors surgery got a look-in.  A new grit bin was donated to Puckeridge and Standon Doctors Surgery to replace a unit that had been badly damaged.

Finally, in order to leave everything spick and span, all redundant bins and refuse were removed in a skip donated by RRT.

WELL DONE RRT – THANKS FOR HELPING TO KEEP THE PARISH OF STANDON CLEAN AND TIDY !