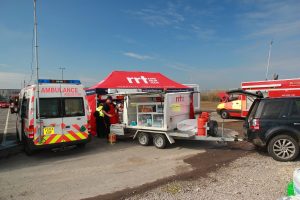 The Cardiff Rapid Relief Team were asked by South Wales Fire & Rescue to support by providing food and drink for the rescue teams.  A team of 19 RRT volunteers were mobilised to cook and serve the food.

Over 350 meals were served to the emergency teams, including Fire & Rescue, Police, Ambulance, RPSCA, RNLI and Mountain Rescue.  One emergency worker commented that good food at a major incident is vital to teams’ morale and ability to perform.

One of the exercises of the day

The day was a huge success for all involved, and witnessing the emergency teams working together in some quite extreme rescue scenarios was amazing.  The skill of the teams and their ability to clearly communicate in a crisis was a lesson to witness, and RRT were proud to be able to support such an event.