Saturday 4th July 2015 saw nearly 500 competitors descend on Martello Fields in Seaford, East Sussex to take part in the South Coast Triathlon event, raising vital funds for Cancer Research, Marie Curie, The British Heart Foundation and many other charitable organisations.  The official charity partner for the 2015 event was Cancer Research UK, whose commitment and dedication has contributed to doubling survival rates for those suffering from cancer over the last 40 years.  Every pound donated helps them in their ongoing battle against over 200 cancers and assists them in obtaining their vision of finding a cure for all cancers.

The Rapid Relief Team being eager to support such a worthy cause offered their assistance with running the event, an offer which was welcomed by the organisers, UK Triathlon.  This saw 14 enthusiastic volunteers from Burgess Hill and Horsham fulfilling essential roles to ensure that the event ran smoothly.  The RRT were positioned at various points around the venue carrying out different tasks, including registering the competitors, issuing them with race numbers, keeping them hydrated with much needed water and the popular High5 sports nutrition drink and marshalling at turn points on the track.

Start of the swim 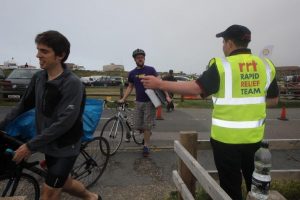 The ‘Fun’ race kicked off at 09:00 with a 200m swim in the sea, 10km cycle and 2.5km run.  Shortly after the Olympic race began, starting with a 1500m swim against strong currents, followed by a 40km cycle and 10km run – definitely not one for the faint hearted!  The competitors ranged from beginners to seasoned triathletes, but all made a tremendous effort to complete the strenuous course, spurred on by the cheers and claps from the energetic marshalls, spectators, family and friends.    The final competition of the day was the ‘Sprint’ race involving a 750m swim, 20km cycle and 5km run, ending with a prize giving session.

The event crew were extremely grateful for the services provided by the RRT, commenting that they’d ‘never had such a team of volunteers, they were all absolutely brilliant, constantly helping and everyone happy’.  Race Director, Keith Hancock remarked that ‘you need to bring twice as many of you lot here in the future, that means we can get even more of you round the course!’  The whole day was a truly amazing and enjoyable experience, made more enjoyable due to the knowledge that generous donations from the proceeds would be supporting the life-saving and selfless work of these charities.