Spring officially began on the 20th March this year – it’s now time to get outside, sweep up the dead leaves, maybe even cut the grass and start doing work in the garden again.  At least, that was what one resident of Horndean thought earlier this week.

On the 1st April (and no this wasn’t an April Fools prank), when their garden jobs were over, they thought it would be good to get rid of the rubbish, and lit a bonfire to do just that.  Unfortunately, they didn’t allow for the strong blustery winds that day, and what started as a small garden bonfire got out of control and started causing problems. 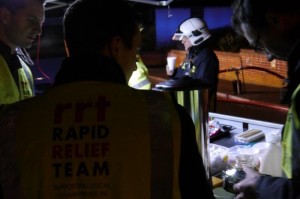 First a garden shed caught alight, and then a neighbouring garage, and a tool store.  By this time of course, the emergency services were on their way to the scene to try and put the fire out.  When investigating the scene of the incident, they found that the tool store had several hazardous contents, including welding equipment and potentially explosive oxy-acetylene bottles.

The house and residents had to be evacuated for some time while around 30 firemen tackled the blaze using specialist equipment for hazardous fires. 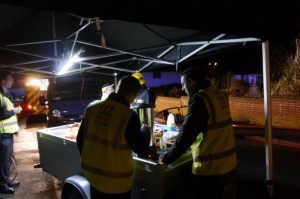 The fire broke out in the late afternoon, and when the emergency services found the dangerous welding equipment they knew they could be there for a long while.  The Rapid Relief Team (RRT) were soon notified and mobilised their volunteers to attend the incident to provide refreshments and shelter for the emergency services.

Hot and cold food and drink were provided shortly afterwards in a tent set up by the RRT, and members from all the services present were able to benefit from this provision.  The tent soon became an impromptu rendezvous for liaison between services as to the progress of the incident. 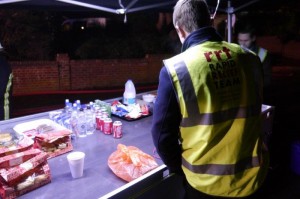 Some of the refreshments offered

Some of the food and drink was donated by local businesses and supermarkets, and prepared and served by the RRT on site.  The saying “an army marches on its stomach” is just as true today as it has ever been.

The fire was under control and put out quickly and efficiently, and the RRT were stood down at the same time as the emergency services, around 00.00 on the 2nd April.

Unfortunately a good deal of personal property was damaged, but thankfully no lives were lost. 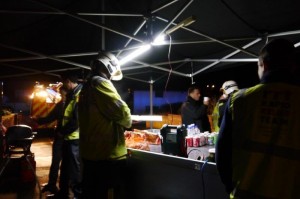 Emergency Services make use of the RRT provisions