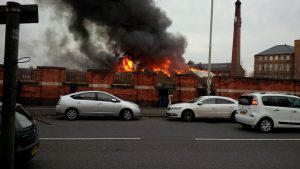 The blaze in its early stages as seen from Abbey Park 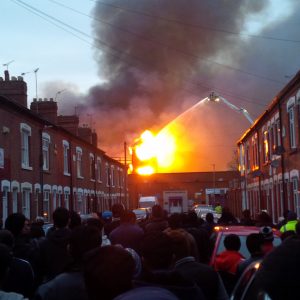 Leicester RRT was involved in feeding emergency services & evacuated residents in Leicester during a massive factory fire in Ross Walk. At its peak, up to 70 firefighters from Leicestershire and Derbyshire battled to bring the fire under control in windy conditions, using 12 pumps, 2 aerial platforms and 6 water jets. About 140 residents nearby were evacuated because of the risk from explosions and toxic smoke.

Thirsty guys queueing for some refreshments 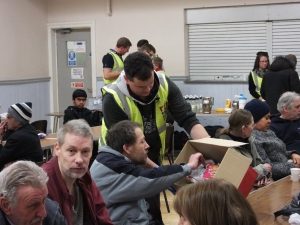 Leicester RRT served hot food and beverages throughout the incident, first at the local community centre for those who had been evacuated (in support of Leicester City Council and Red Cross volunteers), and secondly to the emergency workers on the scene. One of the Sergeants of Leicestershire Police was very grateful for the team’s help, saying “your offer of help couldn’t have come at a better time.”

One firefighter said “We used to get this sort of thing 20 years ago but it’s all stopped. This is a real community spirit”

At the scene on Ross Walk, RRT provided the emergency workers with fresh pizza, crisps, water and hot drinks

RRT were glad to be assistance, and thankful that there were no fatalities.