Three Hundred Years of History – up in Flames

It was the afternoon of the Good Friday Bank Holiday when the Hampshire Fire and Rescue Team were urgently called out to a fire in the village of East Meon, where they were met with the devastating sight of a row of beautiful 18th century thatched roof cottages burning furiously! 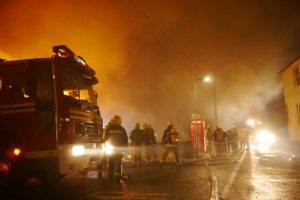 Fire crews from across the region were called in to tackle the blaze and soon over one hundred fire-fighters and other emergency services were at the scene.  Five jets, two hose reels, eight breathing apparatus and an aerial ladder platform monitor were soon all in use to control the fire and to do all they could to protect surrounding properties.

Exhausted from two earlier fires and with the temperature dropping below  -3°C this was going to be another long night to test the fortitude of the Hampshire fire-fighters. They needed all the support they could get.

The local PBCC Rapid Relief Team came onto the scene to offer refreshments and encouragement.  With a rota of attendance in place the RRT were able to maintain a continuous supply of hot food, drinks and welfare support to the emergency services throughout the night.

Hampshire Fire and Rescue confirmed it had certainly been a ‘very busy’ Bank Holiday – crews had been called out to two other thatched roof fires earlier in the day – and this was the biggest and longest to fight.

The support of the PBCC RRT was gratefully received

6 thoughts on “Three Hundred Years of History – up in Flames”