Fifteen exhausted firefighters and one mannequin collapsed at the base of the Spinnaker Tower in Portsmouth! They had just walked over twelve miles (not the mannequin – more on that later) to raise money for The Fire Fighters Charity and Football for Cancer.
Firefighters from several stations over Portsmouth organised the sponsored walk to raise money for The Fire Fighters Charity and Football for Cancer. The Plymouth Brethren Rapid Relief Team (RRT) willingly agreed to manage the catering for the event. The Fire Fighters Charity does very good work providing assistance to fire fighters and their families, and Football for Cancer has raised over £200,000 since it started which has been donated to various cancer treatment organisations in the UK. These include Marie Curie, Naomi House (children’s hospice), Macmillan Cancer Support, and The Rowans Hospice.
The fifteen fire fighters (plus those representing Football for Cancer) assembled bright and early on Saturday 4th April at Horndean Fire Station. There were approximately 70 taking part in the fundraising event. They were greeted by the RRT and served bacon, eggs and coffee, with trimmings. This must have been appreciated as 100 rashers of bacon and 40 eggs were consumed in the first 30 minutes! The firemen were in full bunker gear and were carrying two training mannequins weighing around 50 kilos each on stretchers, so they needed a good send-off. Donations were collected from members of the public as the walk proceeded through shopping precincts and in total, over £8500.00 was raised!
The walkers were kept enthused and in good spirits by hot food and drinks which were prepared and served by the RRT at fundraising stops in Waterlooville and Cosham High Streets. A reporter from “The News” (local paper) joined in the walk, carrying firefighting equipment in a brilliant spirit of camaraderie. His report on the event can be read online by clicking here. At the end of the day a meal of slow roast beef in rolls with salad and extras was served to the walkers and their families, and was topped off by fresh home-made brownie cake – as much as you could eat! Nearly 7kg of beef and 150 rolls were enjoyed.
Members of the public were very supportive, and the event provided an opportunity for the walkers to spread the word about the charities they were supporting and raise awareness of the valuable work the fire service does. A very good amount was raised for some worthy causes – a rewarding and enjoyable way to spend the Easter weekend.
A message to RRT was received afterwards from the event organiser: “Neil, many thanks for all your help and support yesterday. We couldn’t have done it without you. Everyone who took part and came along to support said how nice, kind and generous you all are!

Breakfast was enjoyed by all

Firefighters and the mannequin are raring to go!

One of the rest breaks 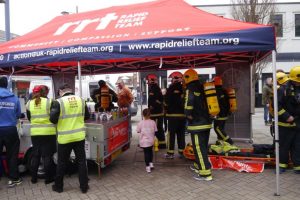 Glad to stop and grab some refreshments

Participants were very appreciative of the support provided by the RRT