In February 1942 the 219 was one of a pack of five Motor Torpedo Boats which attempted to attack the German battle cruisers: Scharnhorst, Gneisenau and Prinz Eugen as they dashed through the English Channel, protected by destroyers, E-Boats and the Luftwaffe. Although the attack was unsuccessful and the battle cruisers managed to get through, none of them were ever able to return to attack allied shipping in the Atlantic again.

The MTB 219 also excelled herself in rescuing a number of downed Fairey Swordfish aircrew. Others weren’t so lucky. Of the eighteen young men of the Fleet Air Arm who flew the wood and fabric bombers, only five survived the battle

Following 15 months restoration work, MTB219 the last one left of her type and a veteran of the famous ‘Channel Dash’, was loaded by crane from her temporary ‘dry berth’ at PBCC members Mr & Mrs Newman’s secure storage yard and transported by specialist lorry for a two mile journey through the town centre to make her way back to the water.

The town’s mayor and mayoress were in attendance, together with other dignitaries. Members of the PBCC provided hot food and drinks throughout the day.

The Sea Cadet band played MTB219 to the dockside. Moving speeches were made by the various dignitaries including The Mayor of Bridgwater Cllr Steve Austen, The Chair of Sedgemoor Council Cllr Peter Downing, and the owner of MTB219 Mr Paul Childs who is CIC of Militaryboats.org.

The volunteers and all those who had helped with the restoration project were thanked, and a special thanks was given to the members of the PBCC and the Newman family for the use of their storage yard, workshop facilities, their support, their time, and the enthusiasm of the volunteers……..without this Mr Childs said “this project simply couldn’t have happened”.

A wreath was fastened to MTB219 to remember those who had served on her; she was showered with champagne, and lowered to the water.

The following images and videos are for the readers’ interest.

MTB219 arrives at the yard after its journey from Chelsea, London Oct 2013 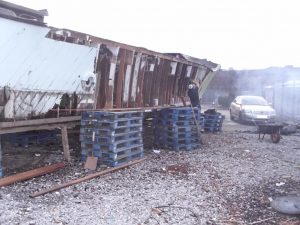 Starting the restoration process on the right side of the boat

Early start to provide refreshments for the transport and MTB219 crew

The Mayor of Bridgwater looks on as action starts

The Mayor of Bridgwater Cllr Steve Austen addresses the crowd

Mr Paul Childs speaks to members of the PBCC, The Mayor of Bridgwater Cllr Steve Austen and The Chair of Sedgemoor Council Cllr Peter Downing.

Lowering MTB219 into the water