At around 6:30pm on Tuesday 2nd November, eight fire crews from three counties attended a fire at a detached house in Woodgreen, Fordingbridge. Around 70 firefighters fought the blaze as it ripped through the building destroying everything in its path.

Villagers from the close-knit community could only watch in horror as the flames tore through the large detached property.

Stuart Hall, chair of Woodgreen Parish Council, said residents of the village were ‘truly sad’ for the family.

“They are lovely people”, he said. “They were out at the time the fire began, but returned when it was raging. It was very sad”.

“We are all very very upset about it – it is difficult to imagine the sense of loss they must feel” he said.

At around 9:15pm, the Southampton Rapid Relief Team were called by Hampshire Fire and Rescue Service requesting catering and welfare support for the 70 firefighters and other emergency staff that were at the scene. 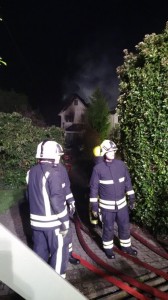 A team of RRT volunteers quickly mobilised and were soon on their way with the catering support unit arriving on site around 10:30pm and shortly after were serving hot and cold drinks along with snacks to the exhausted emergency personnel and neighbours.

A second Rapid Relief Team arrived on site just after midnight with equipment and supplies to provide hot food and 20 minutes later were serving delicious cheese burgers which were gratefully welcomed by the hard working fire crew. 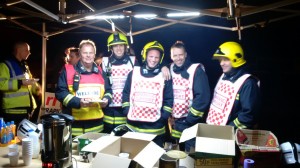 Compressed air foam systems were used to protect nearby buildings, and crews remained at the scene well into the night.

3 thoughts on “New Forest Home Burnt to the Ground”