My Grandfather – Samuel Harold Bond, was one of the younger sons of Thomas and Mary Bond – local in a small meeting near Exeter called Newton Poppleford. They lived on a farm where J.N.D used to visit them. However, as there were four sons, there was no room on the family farm for him when he grew up. He was apprenticed to a Wheelwright, progressed from that, made his way up the country, eventually settling in the Manchester/Stockport area where he began his own Motor Body Building Company, ‘S.H.Bond Ltd.’ His wife was Ruth Shephard of Taunton. His only daughter, Dorothy, married William B. Hamlett of Stockport who joined the business when Mr. Bond’s health began to fail in the 1940s.

During the war, in 1944, a man in business nearby, named Mr. Larkin, of the British Trailer Company Ltd. came to Mr. Bond after hearing that General Montgomery had no mobile office of his own in which to work. He proposed that he would give the trailer free if S.H.Bond’s would construct a map/office van to go on it and it would be presented to the General as a gift for his own personal use. Mr. Bond readily agreed and the map van was entirely designed and built by his workforce who gave their time free for the purpose.

When it was completed, to quote from my father’s notes “We had a visitor, Captain Chauvas (a member of Monty’s staff) a young veteran of the campaign in Africa, who was delighted with what he saw.”

The completed vehicle was then taken to General Montgomery’s headquarters in London, presented to him, and official photographs taken of the whole group standing by it. Mr. Bond is standing next to the General, on his right, and another brother who worked for him – Mr. Cyril Beckman standing at the back.

General Montgomery expressed his appreciation of the gift in the enclosed letter to Mr. Larkin, dated 26th June 1944. There are many references to the map van in his biography and we have been told that every morning Monty would read his Bible and pray. The van was with him during the whole of the campaign in North West Europe and eventually was donated and is now in the War Museum in Duxford, England. 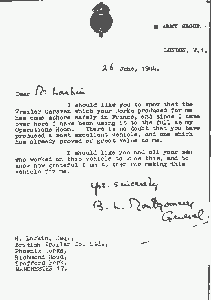 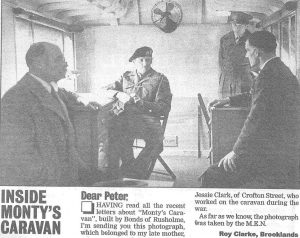 Monty’s Caravan in the War Museum in Duxford – England

Inside the Caravan showing General Montgomery’s office and the maps on the side walls.