The emergency planning unit for the North East approached the Rapid Relief Team during 2014 asking for help and services on a pre-planned Emergency Evacuation Exercise, this was following the extensive work and labour carried out by RRT during and after the floods in 2013 which spread across many parts of England forcing hundreds of people to evacuate their homes.

In 2013, Middlesbrough was hit by major rain storms and high tides causing the river banks of the River Tees to flood. RRT assisted in evacuation of large numbers of residence from their flooded homes to the Billingham forum for the night. The idea of this pre-planned exercise below was to improve the organization and facilities if such an event were to happen again and the below log of the day was kept by the RRT team leader:

9.00am the day began at the Rainbow Centre, Coulby Newham, where Lynn greeted us and showed where the RRT marquee was to be set. She explained that around 100 students with prepared scripts would be arriving at the rest centre at 11.00am on three buses. They will have been evacuated from some student accommodation in Middlesbrough where there had been an explosion and fire at 2am. Some would only have their nightclothes and would need to be provided with warm clothing and blankets, others would be distressed and needing to contact their near ones. Others still would have pets needing care, also members of the public, media and concerned family members will need coping with. 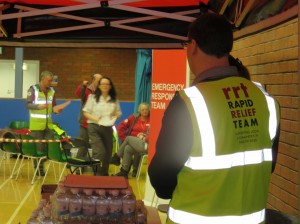 Setting up for the ‘evacuees’

Mike and Steve set off in the RRT van to collect beds, bedding, food and other essentials from the Council Emergency Planning Centre on Riverside. Having returned, they set up supplies of essential foods (biscuits!) and RRT water ready for the onslaught, then went around the complex acquainting themselves with the rest of the team. These included Raynet Communications, Cleveland Police, Salvation Army, members of Stockton and Middlesbrough councils and British Red Cross.

The evacuees start to arrive.

11.00am the balloon went up! Three yellow buses arrived with our refugees (who looked pretty cheerful considering it was 2am, cold, raining, and they were in their nightclothes) Stockton Council took the first shift, registering each person, issuing them with numbered wristbands and recording their names and contact details in case they needed to be traced. They were then ushered into the rest centre, where some needed counselling and others required medical care and essential medication. There were several dogs, some lost phones and one person had a large amount of cash which needed to be looked after. The RRT team was busy distributing beds and bedding with water and biscuits, and helping to direct evacuees to the correct points to be cared for.

12.00 pm things had settled down well, and the Salvation Army ladies went into action providing a hot lunch for all our students. That eaten, the students were sent out for a walk around the shopping centre and asked to return in an hour for a re-run, which this time would be run by Middlesbrough council. The rest centre team regrouped over a buffet lunch, and discussed what went right and what was not so right.

1.30 pm it was time for the second run, using lessons learnt from the first one. This time Middlesbrough council were short staffed and RRT were asked to help out with the registration process and to be on the information desk. All went well and for the second time the evacuees were processed swiftly and efficiently.

The evacuation centre of operations.

3.00 pm the students were back on their coaches to Hartlepool and the RRT team were clearing away the equipment and tidying the venue. One last trip back to the Council depot with beds and bedding, and the job was done.  We were very pleased to receive the below message from Claire Taylor.

“Emergency Planning Unit would like to thank RRT for assisting us with the rest centre exercise on 26th February.  Assistance from your voluntary sector is so important to ensuring we can deliver excellent service in a rest centre.  Your hard work ensured the exercise was a great success and we’ve received many positive comments from students and council staff about the RRT volunteers, and how they assisted them during the exercise.  Your kind support is much appreciated, and we look forward to working with you again in the future”