The village of Amatrice was devastated following the earthquake of 24th August 2016.  The earthquake measured 6.2 on the Richter Scale, and resulted in the deaths of 295 people, with others still missing. Nearly 400 people were injured, and thousands left homeless.

Amatrice, one of the worst hit villages, in the province of Rieti, has a population of just over 1,000 people, sits 955m (3,133ft) above sea level and is surrounded by beautiful scenery.  Amatrice is rich in history, having buildings dating back to the 13th Century.

RRT ended up serving nearly 4000 meals to rescue workers in Amatrice over 4 days after the earthquake. RRT Italia contacted the emergency services offering assistance in providing food, and this offer was readily taken up on Thursday afternoon, and this is what happened….

With a team from the UK being sent to assist, there were flights to book, bags to pack, time was tight!!  RRT Italia had already started organising teams, liaising with the rescue services, ordering food, refrigerated vehicles, and a thousand and one other things!! Once we had touched base with the RRT Italia team, we set to with plans to move RRT Operation Amatrice forwards.

It was decided to go up the search and rescue base camp/headquarters near Cittareale (about 20kms west of Amatrice), and make contact with the search and rescue teams.  Once there, it was clear the need was not there, but in the village, so that was the next destination.  We got into the village, through numerous police roadblocks, and then tried to get hold of our contact.  However, we were told we were in the wrong part of the village, and needed to be in the new part, near the helicopter pad………. easier said than done!! The way there was difficult as the village was blocked and most roads were cordoned off.  We went back to base camp, and the fire services took us in one of their vehicles to the site between the new town that was not badly damaged and the old town that was all but destroyed. The road in however was not in great condition, and at one point was no more than a dirt track around the back of a village. Once in the village, they found a carpark where they wanted us to set up.

Some of the devastation in the village of Amatrice

However, it was full of cars that had not been claimed, they belonged to victims of the earthquake, and had to be moved for us. Meanwhile, back in Rome the RRT team had spent the day arranging food, BBQs, drinks, cooking implements, drawing up team rotas, hiring refrigerated and freezer vehicles to name but a few things!!  We got back to Rome at about 11pm Friday, with plenty to do and an early start in the morning.

The truck from UK arrived at 2am with water and marquees, the vans were then loaded up for the day, and a quick induction for the Rome RRT volunteers.  The food was collected from the wholesalers at 7am (1400 burgers, rolls, bags of onions, lettuce, boxes of tomatoes, chocolate bars etc.) and we set of in a convoy of 7 vehicles to Amatrice, with around 18 volunteers in the team.  We arrived at base camp at 9am, We had to wait at base camp for an escort, and eventually arrived in Amatrice at 11.30am.  We then had to wait for the area to be cleared, so we couldn’t get to our location until 12.30noon where they were still removing cars, so the team got stuck in to help.

RRT Team clearing up before setting up camp

RRT volunteers handing out water before setting up

Camp set up and serving meals

RRT and the local Carabineri

Once the cars were cleared, and carpark had been swept (by RRT) it wasn’t until 1.30pm that meals were being served.  As well as food, RRT had gloves that had been donated, as many of these rescue workers were working with bare hands.

Saturday the camp had to be moved to make way for the rescue services and ended up like this…….

It was very busy until 3-3.30pm, and then it slowed down which gave everyone a chance to catch their breath for a very short while, have something to eat and then on to cleaning the windows of some of the emergency service vehicles!

RRT volunteers working into the night….

At 6pm more rescue workers began to arrive, and it was very busy until 9pm, at which point we decided it was time to go and prepare a large number of meals to leave behind – on went 150 burgers. RRT team left at 9.30pm and arrived back in Rome, a very tired, pleased and still enthusiastic team. Once home, clothing, implements had to be cleaned and teams prepared for the next day.  A lot of work done, but still a lot to be done……

The Fire and Rescue camp being set up next door

Another early start, with food being collected at 7am, and this time we did not need an escort – word had obviously spread amongst the rescue workers, and with fluent, persuasive Italians at the front of the convoy, we managed to get nearly all the way there.  Once we explained who we were the response was ‘oh – you’re the sandwich people’ they let us though!!  There was one hold up that delayed us significantly as the road was being repaired, and the team was on site by 12.00noon and a larger queue than the day before was ready to meet us. RRT set to, and were soon busy serving the rescue workers, carabinieri, polizi, fire services, urban search and rescue teams, villagers who had lost their homes, and even a media crew came down to see what was happening and enjoy some hot food.  A budgie that had been rescued was given some lettuce, and some of the search and rescue dogs enjoyed RRT water.

Even the animals got the RRT treatment

Monday was even busier, with a record 325 burgers cooked in 53 minutes which is a burger every 9.6 seconds, showing the team spirit there was there.

Considering this was done with 2 Webber BBQs, no mean achievement!! The team on Monday was around 25 volunteers, and there was plenty of work for all!

As news began to spread about RRT offering, the queues started to build up…….

RRT had initially decided to stay until Friday, but due to the worsening weather conditions, and the increasing number of aftershocks, it was decided to break camp mid-afternoon, and be out by 3pm.  When the news was broken to the commander in chief of the rescue operation, he was visibly upset as he had no way of feeding his men like RRT had.  However, he could see our reasons to leave the village.  As the team left the village, there was torrential rain, turning the dirt track into a muddy morass, confirming the decision to leave.

By the end of Tuesday, nearly 4000 meals had been provided 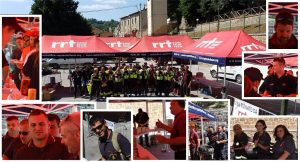 Many of the refreshed, fed and happy rescue workers

Some more of the RRT volunteers