At 8.00am a helicopter crashed into a construction works crane at the side of the St Georges Tower, 200m high.

Tragically the helicopter fell to the road and burst into flames, killing the pilot and a motorist.

The police closed off a large catchment area fearing that the crane could collapse in any direction. 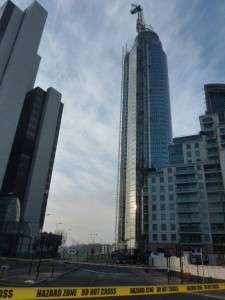 The RRT set up were the Police had  made their HQ, an ideal location because the London Fire Brigade, Ambulance workers, Health and Safety officials, Gas Board, Air Accident Investigation Bureau personnel, crane specialists, RAF personnel, council workers and construction workers all held meetings here.

As the day went on the temperature was around freezing point outside and the police and emergency workers who were working outside for hours on end were very cold, and were very appreciative of the refreshments provided. There was a constant stream of cold and tired workers to be revived and refreshed.

The incident commanders requested the RRT to a organize night shift. On exploring the very wide cordoned area, many Police Officers that had no refreshments were looked after. Sainsbury’s kindly donated food to help keep our stand going through the night and into the next day.

One of the Police command units kept running out of generator fuel, so the RRT filled up for them.

The RRT was extremely impressed by the dedication and hard work of the emergency services and were very thankful of being able to join in the work to provide the much needed refreshment and sustenance that was so gratefully accepted.