On the evening of Wednesday 8th July at 8:30 pm, the Rapid Relief Team investigated dark columns of billowing smoke pouring into the evening sky which could be seen from across the city. Although it took a few minutes to locate the fire, they were able to get to the scene shortly after the main cordons had been set up by Avon and Somerset Constabulary and established contact with the emergency services manning the road closures. 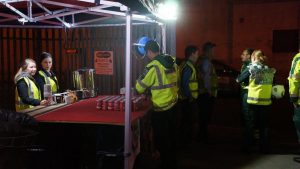 The busy RRT Tent at the Fire

It turned out that an established fire was in fact ripping through a sizeable industrial unit building in Kingswood, Bristol and the emergency services had no option but to evacuate 26 persons from the nearby homes. With more emergency vehicles descending into the area there were reports as to a person trapped inside the building although thankfully everybody was finally accounted for and nobody was injured.

In direct contact with the incident commanders of Avon and Somerset Fire and Rescue service, the RRT established a base in an adjacent business premises which allowed them to provide hot and cold refreshments and other much needed facilities to those directly involved in getting this blaze under control. One responder from HART (Hazardous Area Response Team) commented on the fact that such an amazing facility was made available to the emergency services. The RRT would like to thank the business owner of Bridge Valley Beverages for their support and provision of these premises during this incident.

Firemen queuing for a cuppa!

At the height of the fire, more than 50 firefighters were on the scene, 8 fire engines, 1 aerial rescue pump, a number of supporting appliances and other emergency services whilst 3 high pressure hose reels were used to suppress and extinguish the fire.

The RRT remained on site making sure that the emergency services were provide with the much appreciated refreshments until 12:30am when the services started moving out.  A comment was passed by one of the firefighters saying that he hoped the RRT could be at every future incident!

The devastation left by the fire.

A tender remained on scene most of the next day to damp down and extinguish any hot spots following the fire and the RRT are again ready to serve these dedicated service men and women who put their lives at risk when the call comes.

5 thoughts on “Fire in Kingswood, Bristol”