Fire broke out just before 9:30pm on Monday 27th July in a disused paper converting factory in Southway, Plymouth.  The blaze started at the west end of the empty building, and was aided by a strong south-westerly wind which rapidly engulfed the structure.  Fire crews from every one of Plymouth’s 5 fire stations attended, and extra teams were brought in to assist from 8 other stations in Devon, and 3 from neighbouring Cornwall.

The Blazing inferno that greeted RRT

The fire service reported that they received more than one hundred 999 calls within only 40 minutes after the inferno broke out!  The fire in Plymouth could be seen from the Cornwall side of the River Tamar, prompting many calls to the Cornwall Fire Control.

Firefighters tackled the conflagration on 3 sides, using 2 ladder trucks and 7 main jets.  Due to the wind driving the flames through the building, crews had to make efforts to protect the adjacent properties.  The Plymouth branch of the Rapid Relief Team (RRT) volunteered to assist with refreshments, their teams providing chocolate bars and bottled water to the emergency services at work.

The caved in roof.

Local residents flocked out of the surrounding houses in Southway to witness the evening’s events unfold (some in their night attire, others more prepared in hi-vis garb to assist the police).  However they were later advised to return indoors and warned to keep all windows and doors shut due to possible chemicals within the factory turning the billowing smoke clouds toxic. 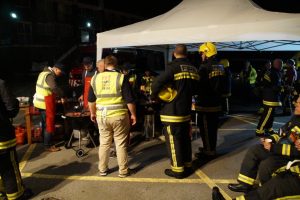 Hot drinks were in high demand

Firefighters stayed out of the building as it was too risky to enter.  Canisters were present in the old factory causing explosions, and parts of the building caved in and eventually the roof collapsed.  Devon & Cornwall Police widened the cordon around the site, with further stretches of road sealed off, as the scene became more dangerous.

Keeping the firement topped up with refreshments

As the evening wore on and it became clear that the services were there to stay for a protracted time, the RRT set up a refreshments base in a nearby car park.  Supplies were procured from supermarkets and equipment was brought to the site.

The nearby McDonalds at Crownhill came up trumps that evening, cooking up 100 cheeseburgers in record time – and at a substantially discounted price.  The feast continued when the BBQs were fired up, and many kilos of beefburgers, sausages and bacon later, even the firefighters had to admit they were were chock-full of food.

All of the emergency teams were very appreciative of the ample provision of refreshments throughout the incident.

The Aftermath of the fire

The whole operation was scaled down at 3am, with 4 fire crews remaining during the night to keep the smouldering ruin under control.