A severe fire broke out Wednesday 1/10/14 at 7:19pm in the buildings previously occupied by former nightclub ‘The Majestyk’ in Leeds City Square.

Firefighters from all over West Yorkshire we called in to fight the blaze that was raging on both floors of the 2 storey Grade II listed building.  Traffic on nearby roads ground to a virtual standstill as police put diversions and restrictions in place.  As the evening … Continue to read 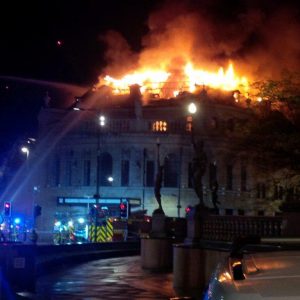