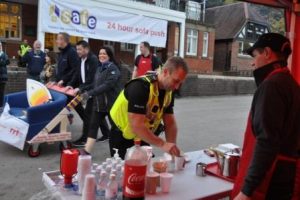 Sofa with surf-board pushed by volunteers past the Cricket Pavillion, Queens Park Chesterfield.

The World Homeless Day in Chesterfield on Thursday 8th October was a truly amazing 24-hour event with communities coming together from all over Derbyshire to support the homeless and vulnerable! 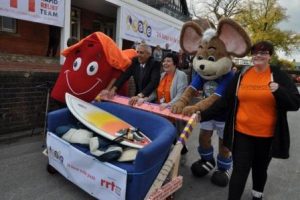 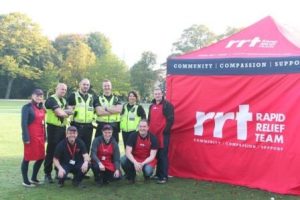 “Sofa Surfing” is a term used by people with no fixed abode, who resort to sleeping every night on a different sofa, often with people they don’t know.

The adapted 2 seater sofa complete with surfboard was pushed and officially started off by Deputy Police Crime Commissioner Hardyal Dhindsa.   He said “I’ve done 2 laps and I hope it makes other people come and support”.

The Sofa Push was maintained constantly 24 hours and pushed by supported Homeless and vulnerable young people aged 18 to 25, along with supporters and volunteers from local businesses and members of the public. 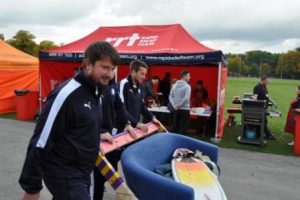 Darren McQuade of Chesterfield FC and team members show their support of the homeless and keep the Sofa moving!

The Sofa relay never stopped …changing hands to a squad from Chesterfield FC including Darren McQuade and team mascot “Chester the Mouse”.  Chester found the cheese in the RRT Marquee a major distraction, making regular attempts to take a slice!

The staff at SAFE Charity do a fantastic job helping homeless youngsters into settled shelter, guiding them with life skills, money management and how to find employment. 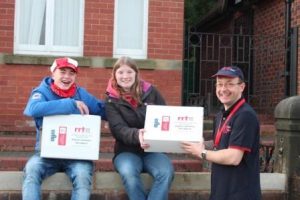 Mike, a young supported homeless teenager said “Rapid Relief Team are a brilliant organisation…they’ve given me a food box which I’m very grateful for, with all porridge and food, soup… it makes me very happy!  Thanks very much guys for all your support!”

Coffee all night for some – RRT Volunteers serving hot drinks