On Thursday 8th July 2016, Birmingham RRT attended the incident in Nechells, Birmingham, where 5 men had tragically been crushed and killed. 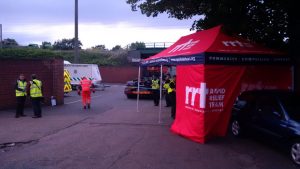 The emergency services were working in very dangerous, difficult and stressful conditions.

RRT volunteers attended the incident and set up a support marquee and were able to provide much needed refreshments and support for the emergency services in the work which they were carrying out, and also to the many grieving families at the scene who were waiting for news of their loved ones.

RRT with a well-stocked table of provisions

RRT continued this service, until just before midnight. By this time two bodies had been recovered and the forensic team needed to wait until daybreak to resume the work. Members of the various emergency services confirmed that the operation the next morning would be greatly scaled down, so RRT left them with food and provisions in a police welfare van for the remainder of the incident.

Media interviews were conducted near the RRT tent

RRT’s thoughts and prayers are with the families of those who have lost loved ones.