Two members of Walpole’s staff were at the North Pickenham depot of Walpole Transport, and were coming off their morning coffee break when the fire was spotted. The warehouse manager attempted to put the fire out, but the blaze was too big to manage. 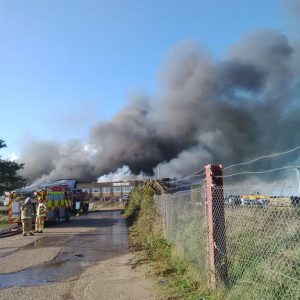 The plumes of smoke.

The fire brigade were called, and first to respond were the crew from Attleborough, Norfolk. All the usual fire crews in the area were on strike, so volunteers had to be scrambled from across the county.  The plume of smoke could be seen from 15 miles away and the fire crews knew that it was going to be a long job.

Shortly after the first tenders arrived at the scene, extra water supplies had to be found. This proved very difficult, due to very bad water pressure in the area. There were several drainage ponds were within reach, but there was no pumping facilities available until 3pm.

At around 12.30 the RRT in Swaffham made offers of refreshments to the Divisional Commander at the scene, and by 13.30 cold drinks and snacks were being served to around 60 fire service personnel by RRT. Because of the strike there was unlikely to be the usual 4 hourly shift changes, so hot sausage rolls, and teas and coffees were provided, most of which was generously donated by Tesco in Watton and Swaffham.

UK Power Networks had been called to disconnect any electricity to the building, and Anglian Water, which was next door, opened up a large water outlet for the pumping crew to use. The biggest concern was potential environmental damage caused by the vast amounts of asbestos dust and ash, which could likely be deposited on the nearby villages of North Pickenham and Holme Hale. 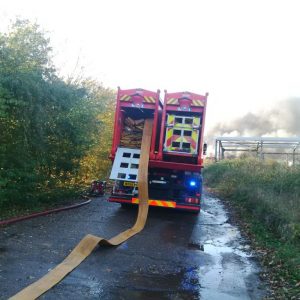 8 inch water pipe to pump from nearby Anglia Water

By 16.30 the emergency personnel at the scene had reduced to 16, as the only real concern was the fire spreading any further, because 2 diesel tanks were positioned very close to the building, which fire crews did a fantastic job in protecting these, and by 20.15 when the 3rd RRT shift began, reinforcements had relieved the day shift fire crews, who by then had been working hard for 8 hours.

RRT was called off the scene at around 22.30.  A McDonald’s breakfast was welcomed by the fire crew at 7.00 on Sunday morning and refreshments were left at the scene during the day.   RRT finally withdrew at 16.00, after the Fire Investigator was happy that the fire was safe to leave.

After the fire – the scene of devastation.

This fire would have been a massive blow to the Walpole family and all those employed there. Our thoughts are with them in their efforts to get re-established on the site.