Newtown fire station in Mid-Wales are in need of more volunteer fire-crew, so on Saturday 24th October they opened their doors, asked for a hand from RRT and invited the public to a fun day at the local fire station. 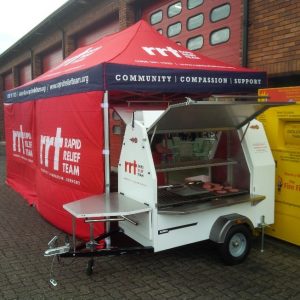 Nothing was done in half measures, it had to be a day to remember as Dai Pryce (he was there the day they opened the station in Newtown – 25th October 1985) was retiring after 30 years of hard work and coincidentally it was Dai’s 33rd wedding anniversary! 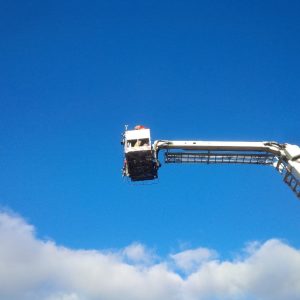 After a very wet start, the day ended with some blue sky and excellent views for these ‘riders’. All fire and rescue vehicles were on display and open to viewings, there was a high-rise lift ‘ride’, chip pan fire demonstrations, RTA (road traffic accident) demonstration involving a full ambulance crew, rides on a mini fire engine and a traction engine, simulator, sweet stall, souvenir stall, and last but not least, free food provided and served by local RRT members.  In all, the RRT served over 220 burgers. 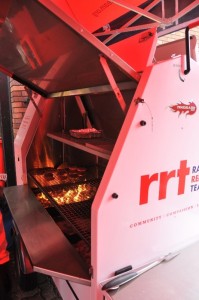 RRT were proud to be cooking their burgers on the all new BBQ trailer; fired up by only 30kg of coals!  The BBQ attracted a lot of attention with many comments on its size and capacity. The local Assembly Member, Russell George attended the day and was impressed with what the RRT team were providing.  With all the equipment, he commented on how much potential capacity the team had. 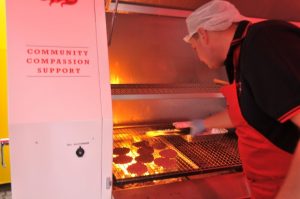 At the end of the day, the station manager conveyed his thanks to the RRT for all their work, using words he had heard from many describing the RRT’s efforts as professional, organised, happy, efficient, excellent teamwork… the list went on!  The fire crews were very happy with the results with three potential new recruits.  As the service is voluntary, the local people are very grateful for the unselfish and often traumatising work these people do for the community.

The day was summed up perfectly by one member of the public saying “I love the atmosphere, everyone seems so open, honest, happy and free – it just feels right!”