Lancaster and Preston RRT summoned to assist with the Kendal Floods

As Storm Desmond tore through Britain, Kendal in Cumbria suffered terribly! On the 5th December 2015; BBC news reporting on the Cumbrian floods alerted RRT that their help was going to be called upon in Kendal and as the day drew to a close, around 80 people had been evacuated from their homes as the water levels rose beyond belief!

The RRT team leader contacted the Town Hall to offer their assistance and the manager there was extremely grateful to hear from them and requested that they provide a hot meal for the people who had already arrived. Lancaster and Preston RRT got to work straight away.

With the teams summoned, provisions were purchased and they headed for Kendal – only to be frustratingly stuck in the floods themselves!

Back at the Town Hall, some RRT members who had got through, were scouring the streets of Kendal, innovatively searching for any way to get some hot food in the meantime! The Kendal residents were incredibly helpful in this dire situation, showing an excellent community spirit; Tesco, the local kebab shop and Pizza Express generously donated chips and snacks to keep the evacuated people’s spirits up until more of the team arrived.  All this time, more and more Kendal citizens were streaming in the open doors of the Town Hall for shelter, traumatised, shocked and weary.

Several RRT members carrying food for this incident were completely stranded around Lancaster due to the water! Despite these hurdles, the food was retrieved from the stationary vehicles and hurried on up to Kendal.

RRT cooking up sausage and bacon rolls for the evacuated people

One of the vehicles that managed to get through the flooding

Finally, after 8 members were able to get through in 4×4 vehicles about 8.30pm, the Town Hall kitchen facility was put into good use and bacon and sausages were being cooked as fast as possible. By 9pm people were being handed a hot bacon and sausage roll along with hot or cold drinks, snacks and cakes which were all gratefully received. The emergency services outside were also catered for – some of which hadn’t eaten for hours. 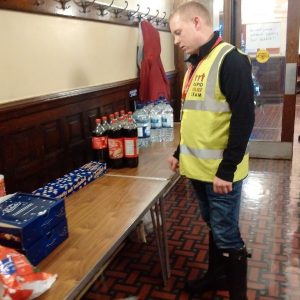 RRT helped to direct the flow of evacuees to the registration desk as well as distribute food. By 10.30 things were calmer and the team began to clear up as evacuated people prepared to camp out in the Town Hall for the night.

As the flood water subsided through the week, RRT kept in touch with Kendal and nearby areas and remained on standby to offer their services at any time.