A ferocious fire broke out in the early hours of Thursday 4th December in a paper recycling centre on the Middlemore Lane Industrial Estate. The fire was reported to have started in a paper recycling depot and spread quickly to an adjoining stationary supplies company. This larger building burned extremely quickly and spread to the eight small industrial units housed along its perimeter. Over 10 buildings were affected with at least 5 completely destroyed and collapsed. Several roads and a nearby school were closed for 24 hours and residents nearby were advised to stay indoors because of fumes and smoke risks.  More than 80 fire crews attended the incident at its height, the emergency services were at the scene for 24 hours until they were sure the fire had been contained. 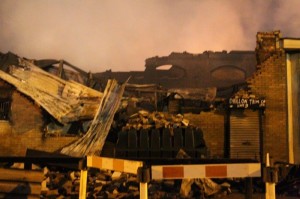 Early press coverage of this fire alerted the RRT local team leader who attended site directly with facilities to set up assistance. Contact was established with Station Commander, Steve Husbands, who directed the refreshment station to be set up opposite the command post. 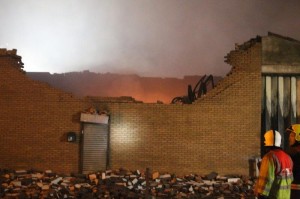 Following this instruction, the wider response team was alerted, to ensure that delivery of provisions and equipment arrived at the scene before the shift change. With the onset of cold weather, hot and drinks were served along with snacks and refreshments much to the glad surprise of the emergency services on the scene.  As the pictures follow – when the firemen weren’t fighting the fire – the RRT tent was the place to be…!

The emergency services were all extremely grateful to the RRT for their help and support, and many compliments were bestowed on the team who maintained the crews with food and provisions for nearly 18 hours!

Staff at the RRT desk. 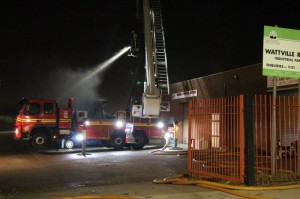