FOOD AND A SMILE FOR EMERGENCY SERVICES AT HELICOPTER CRASH

The Plymouth Brethren would like to extend their heartfelt sympathy to all those affected so suddenly by this tragic happening.

They would also like to thank so many people of Glasgow and businesses who donated food to help in the effort. From the baker in Govan who brought in pies, the Indian restaurant owner who brought in hot curries, supermarkets who donated food, the bank who sent a taxi loaded with provisions, to the members of the public who just dropped off something to help, without waiting for any recognition.

As the tragic details of the helicopter crash in Glasgow unfolded the emergency services and the people of Glasgow did a magnificent job.  Behind the scenes, from 1.00am Saturday morning to the early hours of Monday morning the Plymouth Brethren Christian Church RRT (rapid relief team) provided hot food and drinks to the Police and other emergency services at their temporary base in the Sheriff Court. 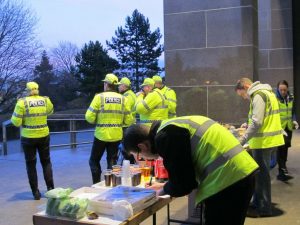 The figures show the scale of the operation and the number of emergency personnel involved. 750 hot bacon rolls, 1000 chocolate bars and well over 1,000 hot drinks were served to members of the police, ambulance and fire services. They lost their own colleagues whom they regarded as family, yet they still managed a smile and many expressions of appreciation as they were handed refreshments.

Further details on the RRT teams work at this incident will follow shortly. 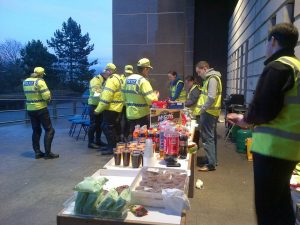