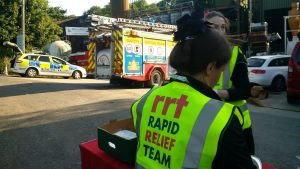 At 9.12am emergency services received a call to alert them to a fire that had broken out at Wood Flour Mills in Bosley, near Macclesfield.  There were 2 loud explosions which shook nearby houses and are reported by locals to have sounded like loud thunder or an earthquake. The scene of devastation was quickly declared a major incident and fifteen fire engines – and around 75 firefighters – from Congleton, Bollington, Winsford, Crewe and Macclesfield attended the scene along with six ambulances, air ambulance and the police force.

Over 20 people were working on the site at the time of the explosion and whilst the paramedics treated many walking wounded at the scene and took 3 to hospital for further treatment, 4 people remained missing and were feared trapped in the premises.

The scene at the blaze

The four-storey building was reduced to just a single storey and fighting the fire was extremely complicated due to a number of additional hazards such as asbestos, propane gas storage and further risk of explosion.

Paul Hancock, Cheshire’s chief fire officer said, ‘When you have two explosions in a building, the building splits open from the inside and as a result of our firefighting tactics over a course of two or three hours it has then collapsed on itself.’

The Crewe RRT attended the scene of devastation on Friday afternoon and although strict cordons were in place, supplied much needed water and refreshments for the emergency services, some of who had been on site over 12 hours.

A midnight trip to the local Tesco, who generously gave the RRT a discount, was carried out to obtain supplies for a cooked breakfast.

Topping up supplies from Tesco!

Specialist search and rescue teams freshly back from Japan and Nepal began searching the site at first light and the RRT began to provide a bacon butty breakfast which was extremely well received. As one exhausted serviceman said “like the gold at the end of the rainbow” and another “the best free meal he had ever had!”

As the search continued the emergency service personnel were visibly cheered and motivated to embrace the days challenges ahead. One said “we only had one hours sleep last night and that wasn’t much so to find a bacon butty here was just amazing!”

The queues at the RRT tables